I don’t want to make age sound like a negative thing as it’s actually never bothered me, hitting milestone birthdays only meant getting better presents.  However, as we get older we don’t jump out of bed on a morning like we did before and we start to suffer with signs of age in our face and bodies, lines, dryness, arthritis etc etc, so anything that helps combat this is a bonus.  We all know we should eat healthily, exercise regularly and drink plenty of water; easier said than done.  At one point I was taking so many supplements it was a wonder I didn’t rattle, so I’ve taken a step back and decided to research what I really should take and what will give me the most benefits, and as there are so many claims regarding the efficacy of turmeric I’ve decided to start with that.

The health effects of turmeric come from it’s main active ingredient of ‘curcumin’ which has anti-inflammatory and antioxidant properties, so if you are looking for a supplement make sure it has high levels of curcumin.  Claims regarding the positive effects of turmeric range from combating serious illnesses such as Alzheimer’s and heart disease, to helping fight inflammation, healing wounds, aiding digestion, helping to limit flare ups of psoriasis and using as an effective sunscreen.  Curcumin isn’t very good at absorbing into the bloodstream though, so it is recommended to take black pepper with it, I’m not sure about this as I don’t like pepper.  I popped along to Holland and Barrett last weekend and the extremely helpful assistant recommended Solgar Turmeric Root Extract, so I’m giving that a go and see what happens, if it seems to be working I will happily forego the pepper. 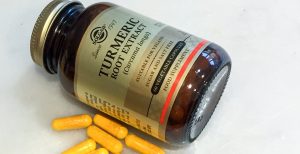 I want to try turmeric not only for it’s health benefits but also for the hair and skin benefits.  The antioxidants are great for ageing skin as they stimulate new cell growth and keep the skin’s elasticity intact. I suffer with sinus problems and often have a swollen area on the left side of my face, so if it helps with the inflammation there it would be amazing.

Turmeric can be used as an ingredient  in face and hair masks but I’m wary of this as it can stain the skin.  If you are going to use it in a mask, test your skin beforehand to check you’re not allergic to it.  Turmeric is also used as an antibacterial agent and can be put on small cuts and wounds as a paste.

However, the point about turmeric which really caught my attention was as an “anti-ageing” treatment, (I’m not keen on the term “anti-ageing” as it has negative connotations, I’m trying to think of something else I can use which is as easily identifiable).  Not to get too technical, but scientists believe that ageing is controlled by genes that regulate the metabolism, DNA repair, antioxidant systems and cell death.  Ageing signals a decline in the efficiency of the system and random errors start to occur in DNA replication which leads to more older cells and damaged tissue.  Current theories are that the causes of ageing are associated with chronic inflammation.  Therefore, as curcumin has both antioxidant and anti-inflammatory properties, studies have suggested that it can help counterattack the effects of ageing.  I found a couple of trials by the American Academy of Dermatology that found that using moisturising creams containing turmeric twice daily for eight weeks had the effect of drastically minimising the appearance of fine lines and wrinkles; dark spots and changes in skin pigment were also reduced by nearly 15%.

Gosh, I feel like I’m doing some sort of thesis here!!  Indeed, I could go on and on about the beneficial effects of turmeric, but don’t worry I will stop here.  I’m on day four of taking my supplements and I will update you with any effects on skin, hair and health.

You may also enjoy: